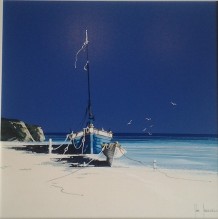 Waiting for the Tide
Sold 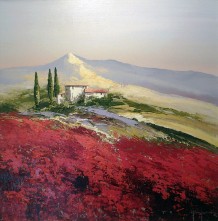 John Horsewell was born in 1952 and has been developing his skills as an artist for several decades. His work captures his favourite landscapes and seascapes and so invites us to share in the world in which he delights.

John lives on the Essex/Suffolk border, he is married and has 2 children. He works from a studio at his home. John comes from an artistic family as both his Father and Grandfather were professional artists. John himself started his career as a draughtsman but was soon drawn to devoting himself fulltime to his painting.

John is essentially and Englishman in love with the vistas of southern Europe and the tranquillity of peaceful seashores. His seascapes have also been influenced by the time that he has spent in the Florida Keys.

Johns paintings are executed with both brush and palette knife which give them their special texture and atmosphere. His skilled creativity produces works of art into which the viewer is drawn to dream and rest.