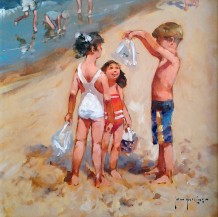 Catch Of The Day
Sold

Born in Bermondsey, London, John attended the Royal College of Art where he received a Diploma for Illustration, he began his career as a specialist illustrator working for some very prestigious names like Rolls Royce, Hawker Siddeley, British Aerospace and eventually NASA where he became chief illustrator.

Initially, his main focus was on black and white line work, and he soon attained the position of studio manager for a leading publishing company. Throughout this time, John continued to pursue his love of painting. After exhibiting in London over a period of years, he took up painting on a commercial basis. This decision enabled him to combine his passion for travelling with the opportunity to paint and collect material from around the world, as well as successful one-man shows and exhibitions in international locations such as Australia, Hawaii, Los Angeles, Madrid, New York and Paris, many of John’s works have been reproduced on magazine front covers, prints, calendars, greeting cards and book illustrations. His style and his enormous success has influenced many other aspiring Artists and amateurs, so you will see from time to time other artists produce very similar work. Thankfully, it is very easy to spot the pretenders.

In addition to the paintings for sale below, take a good look at the ‘Haskins Archive’ page above if you are looking for inspiration. John has re-created many of his best sellers specially for Commissions. Even though he will re-create a scene the new picture will not be an exact copy, as I am sure you will appreciate each and every picture has to be individual. So, it is important to afford him some artistic licence as each and every work has to be unique