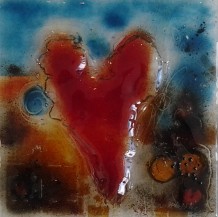 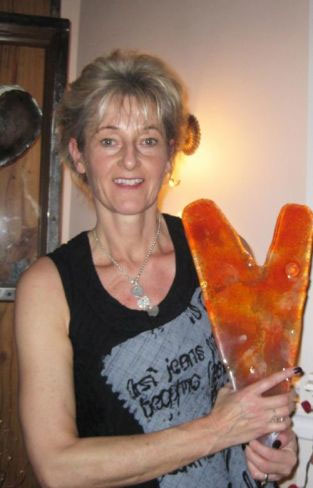 Much of her artwork is based around a theme of hearts which she calls, Art from the Heart. Using mixed media, she creates the most beautiful vivid originals of abstract and semi-abstract forms.

Kiln-formed Fused Glass
Fused glass is glass that has been heat processed in a kiln between 593 and 1500 degrees farenheit.
At the lower temperatures this is called slumping. In mid range it is called tack fusing and in the higher ranges its referred to as full fusing.
Kiln-formed glass involves heating two or more pieces of glass together, causing them to melt into one unit. It dates back to Egyptian times.
Newer fusing methods involve layering of thin sheets of glass that are exposed to ramps of temperature and soaks (holding the temperature) inside a kiln. The longer a high temperature is held the more the glass will fuse. Artists layer multiple colours for stunning original effects.
The decorative designs are created by fusing coloured glass granules between the layers of glass. When air becomes trapped between the layers, it creates the characteristic elements and textures found in kiln-formed glass.
More decorative detail can be added to the design by using metals and metal oxides to introduce unusual colouring and vitality to the pieces, or by painting and firing metallic lustres onto the surface so that the glass exudes a delicate brilliance.
To make a three dimensional piece the glass must be fired twice, firstly to fuse the decorative elements and glass together and then again into a ceramic or steel mould to create the desired form. Controlling the firing temperature is a crucial part of the process and is learnt by trial and error with beneficial  and not so beneficial  accidents along the way.
A number of techniques may be used together and in combination with material experimentation the most exciting discoveries can be made. The manipulation of glass using this ancient technique offers endless possibilities for the curious contemporary designer.
Glass with its peculiar and often unpredictable behaviour is as challenging now to the craft practitioner as it was in ancient times.

Amanda is an artist of many talents. Not only an accomplished painter, but a designer of ceramics, glassworks and bronzes of the both female and male forms.

Amanda works as a P.E. instructor when not creating artwork and has recently successfully completed a PhD.
His recent portrait of the late Sir Bobby Robson helped raise significant funds for the Sir Bobby Robson Foundation