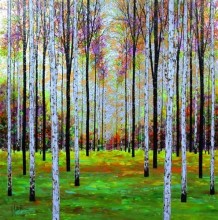 In the Green Woods
Sold 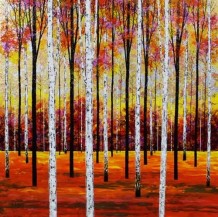 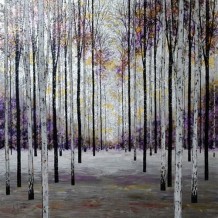 Russian- born Alex Jawdokimov was born on a kolhoz, or collective farm, before spending his childhood years in concentration camps across Europe. Having survived the holocaust, Jawdokimov and his mother- who had entertained British troops in refugee camps during the war- moved to England in 1947, when she found work as a housekeeper in a stately home in Somerset.

Jawdokimov- who by this point was already fluent in four languages-learnt to speak English within two weeks, and went on to train at Somerset College of Art. His creative flair was not limited to the visual arts; as well as working successfully as an illustrator and designer, he also forged a career as a dancer, musician and actor, During the course of his film career he starred alongside Michael Caine and Sean Connery, and was directed by John Sturges and Ken Russell amongst many others.

Despite his many successes, painting is evidently the artists first and most enduring love. Declaring painting has never stopped, the artists exceptional draughtsman-ship is evident in each and every piece, from his earlier city scenes to the more recent birch tree series for which he has become best known.

Using a combination of oils and acrylics, the artist embellishes each piece with gold or silver leaf, capturing the luminescent quality of trees in the sunlight. At the age of 77, the artist shows no signs of slowing down and continues to exhibit his stunning works internationally to this day.